Om Namah Sivaya,
We celebrated the 5th International Day of Yoga with a Yoga class taught by different teachers of different traditions on June 20th and a panel discussion on June 21st at the United Nations Headquarter in NYC.
For the preparation of the events we created online forms for registration, getting 792 registrations for the Yoga class event. Staff, TTC students and guests from the Ashram joined the event, as well as Karma Yogis from the center. In total 74 Karma Yogis were present during the event.

United Nations Headquarters June 20th, 2019
Due to rain on June 20th the Yoga class event was moved inside the building and took place for the first time in the General Assembly Hall of the UN. This marks the first time in history that asanas were practiced inside the General Assembly Hall of the UN. The Sivananda Organizations contribution to the event on the 20th of June was a 20 minutes Asana class taught by Swami Paramananda, out of which the first 10 minutes were a demonstration of the Sivananda practice.

The Sivananda demonstration starts in minute 35:48

Swami Paramananda guided a demonstration that included warm up exercise, main asanas and savasana. This was followed by some exercises in the chair and pranayama during which the people in the hall participated.

The event was transmitted live in the social networks of the Ashram and Center and transmission reached more than 8,000 people through these networks. More than 1,600 people attended the event.

250 yellow t-shirts, especially printed for this event, were given to staff and people interested in the Sivananda practice. People wearing the yellow clothes were spread all over the Assembly Hall during the event. 300 bags containing the Sivananda Yoga Ranch brochure, a gift certificate and the New York City Center brochure were handed out to participants of the event.

The events program officially ended at 7:30 PM. After that, food and certain other articles from other organizations was given to people in the entrance hall of the UN. 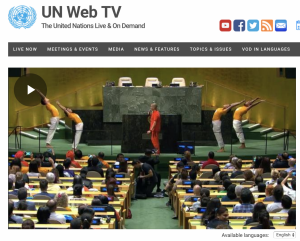 We were also given a space to display a special exhibition on “Yoga and sustainability” conformed by pictures from Sivananda Ashrams and Facts about how Yoga is direct related to sustainability (pdf will be soon uploaded to website). 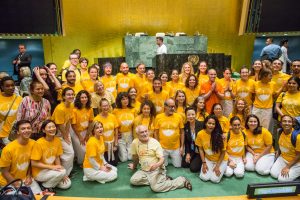 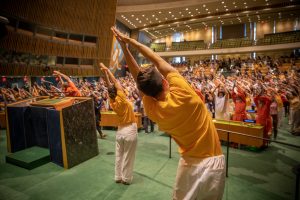 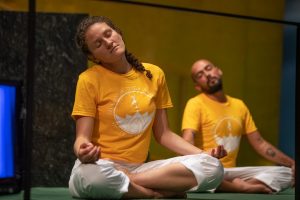 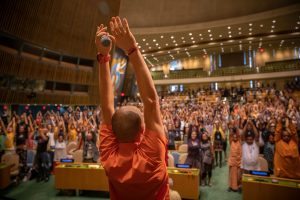 On June 21st the panel discussion with the topic “Yoga for Climate Action” took
place. Srinivasan was one of the 5 panelists that were invited to share about Yoga
and their opinion on the effect and importance of Yoga for Climate Action. The panel
discussion started at 11:00 AM at the United Nations Economic and Social Council
(ECOSOC Hall) in the main building of the UN and ended at 12:30 PM and gathered
around 200 Yoga practitioners, leaders and Swamis, among which were Srinivasan,
Swami Paramananda and Swami Satyapremananda.

Link for the Panel discussion: http://webtv.un.org/meetings-events/watch/5thinternational-day-of-yoga-yoga-4-climate-action/6050891138001/?term= 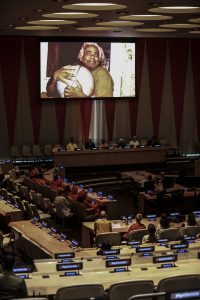 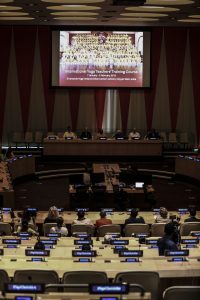 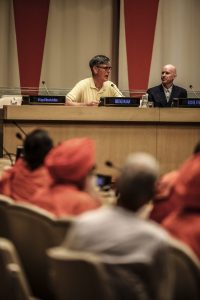 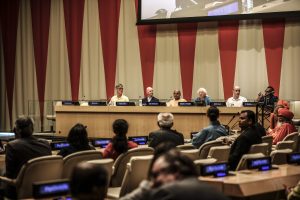 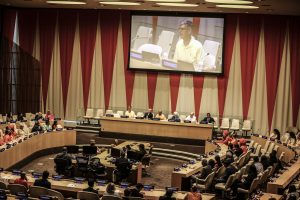 Both events were a great success in the mission of sharing Yoga and spreading the teachings of Yoga in the spirit of Swami Vishnudevananda. 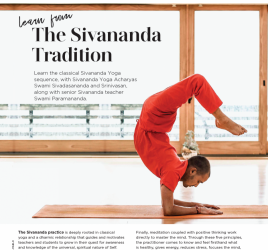